Robot Makers GmbH presents its foresighted track guidance system and a semi-autonomous attachment automation at the symposium “Autonomes Fahren” on 17.06.2019 in Mainz. 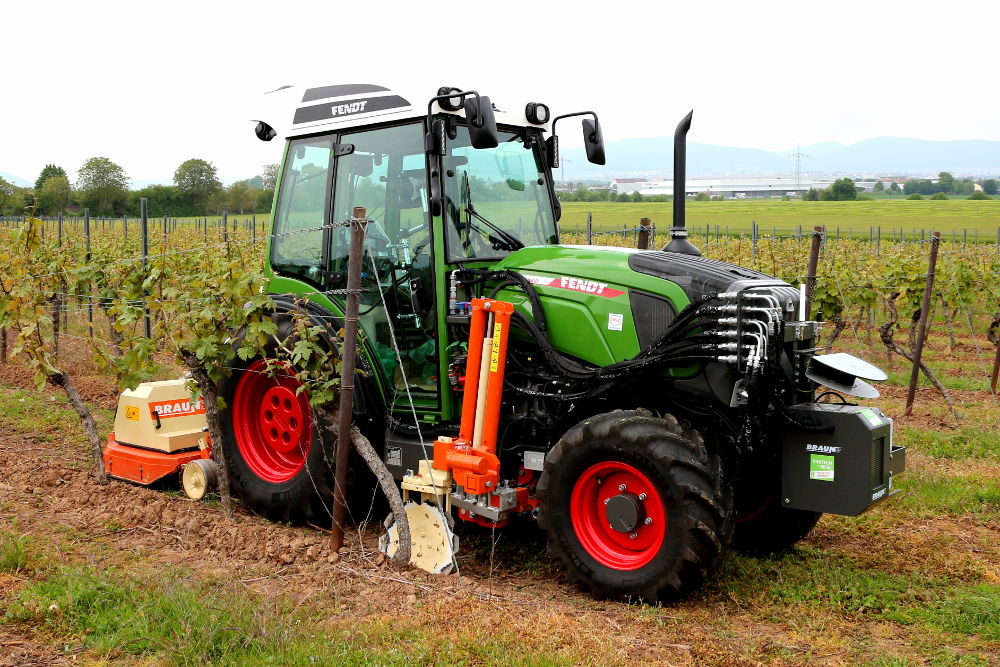 On 17 June 2019, a symposium entitled “Autonomous Driving – Solutions and Competencies of the Vehicle Industry in Rhineland-Palatinate” will take place at the Opel Arena in Mainz. Robot Makers GmbH, a service provider and supplier of innovative system solutions in this field, will also be present and present its portfolio of services using two concrete examples.

On the one hand, the company from Kaiserslautern is presenting the RowCropPilot Assist (RCP), a prototype of a predictive guidance system for tractors in the special crop sector (viticulture, horticulture, tree nurseries). This system relieves the driver and increases efficiency in daily work. Thanks to powerful sensors and a superior environment detection system, the RCP is able to reliably identify the individual crops, plan an optimal lane, and precisely drive along it. In contrast to existing lane guidance systems for vineyards and orchards, the environment is scanned with foresight, thus avoiding jerky driving manoeuvres and undesired steering movements between the plants.

Increase in efficiency through attachment automation

With the Vineyard Pilot Assistant (VPA) from the partner company Braun Maschinenbau from Landau, the company is also presenting a world first in the field of attachment automation. It is a semi-autonomous implement for ecological soil cultivation and mechanical weed control. It is equipped with an assistance system that determines the exact position of the vines and guides the implement in an optimal line along the vines. The distance to the vines and the working depth are kept constant, even in challenging situations such as side slopes and steep slopes. Even intensive weed growth is no problem for the system. Since the driver’s attention shifts away from the attachment and towards the guidance of the vehicle, the working speed can be increased by up to 50% compared to conventional systems. This enables a considerable increase in productivity.

In addition to various live demonstrations, the symposium also offers a highly interesting lecture and exhibition programme. Registration is still possible here until 12 June. The programme of the symposium can also be found here. The presentation of Robot Makers GmbH will take place in the outdoor area of the Opel Arena on car park P1.